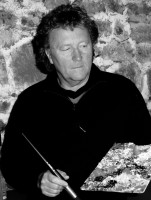 The artist visited Tenby/Wales for the first time in 2008.

About the early work

Having finished his studies towards the end of the 70ies and while growing into a life of art, Rob owed his most fruitful inspirations to his study trips.(Italy/Tuscany, France/Provence, Spain, Crete, and Scotland)

Rob’s pictures do not speak about pure reality. They are like colourful reflections of his soul. The Goethe quote to ‘guide your eye toward what is wonderful in this world and feel what is growing inside you´ (from Goethe’s Italian Journey) has become his mantra, the guiding principle of his artistic work.

Rob has the amazing ability to transform the visible, the external, into an internalised picture, and in this respect colour, or rather the light value of the colour, proves to be the decisive medium of his works.

An explosion of forcefulness, a firework of colours, dynamism dynamicism – but judiciously tempered. The figurative is often reduced to colour blocks, creating a union between the atmospheric and the pictorial. Rob makes music with his colours, and in particular his works in his cycle(‘Scottish expressions’) are impressive testament to this. They have sparkle and depth, power and determination, and then again they appear translucent like watercolours. 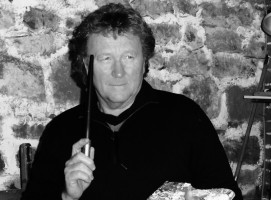 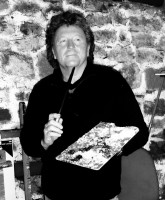