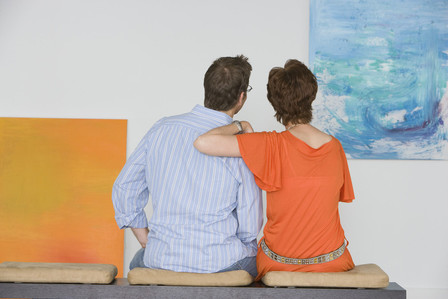 Has weathered the storms

The trunk washed up in Tenby is carved by sculptor

A GIANT storm-tossed ash tree trunk washed up on the beach in Tenby has been transformed into a tribute to the town’s lifeboatman.

International artist Robert Raschke was inspired to carve the two-and-a-half ton trunk after it was found by his wife Helen on a stormy September day just over a year ago.

But his plan for transforming the sea-soaked wood into a sculpture of a 19th Century Lifeboatman ebbed away when high tides and heavy winds carried it away from the Paragon beach, where it first appeared.

Then 16 days later, Helen found the tree again on a Tenby shore- this time 400 metres away on the Castle beach.

German born Robert lost no time in enlisting a shoal of helpers to transport the trunk from the sands to his nearly studio in Sergeant’s Lane, where he has worked since 2010.

Months of work later, and the ash emerged into daylight in its new form – the stunning figure of  the old  lifeboatman, now named Sandy, which is now in pride of place outside Tenby lifeboat station on Castle Hill.

Robert,70, said he was fascinated at the thought of the journey of the ash trunk and its potential from the minute that Helen told him of its discovery.

He said: “Celtic mythology refers to the ash tree as the World Tree, a tree that spans between worlds.

The waves, the ocean currents brought this piece of tree to my beach…..from North Wales?...from Ireland?....from Canada?... who knows?

It was a long time in the water. The tree bark was glossy, very heavy, about two-and-a-half tons!”

As he examined the tree, the forms of its bark reminded him of faces, beards and different figures, and an idea was  born.

He visualised an old lifeboatman, a coxswain from the 19th century, with a sou-wester rain hat, with a beard, big hands, holding binoculars, a cork vest, growing out of a mighty piece of ash tree.

But the following day the tree was gone, only to reappear just over a fortnight  later on Castle Beach.

The trunk spent two month drying out in Robert’s studio before he set to work, and the result was unveiled on Friday.

Said Tenby RNLI press officer Ben James: Tenby Lifeboat Station would to give a huge thanks to Robert for this amazing sculpture, which will surely bring a lot of attention and interest.

“We’d  also like to extend  to Kathrine John of Morris Brothers, Tenby for the use of their pallet truck, which transported the sculpture from Robert’s studio to Castle Square.

Thanks also to Denny Henson of Saundersfoot  Bay Leisure Park, whose mini digger was extremely useful in getting around Castle Hill to put Sandy in his new home outside the lifeboat station. 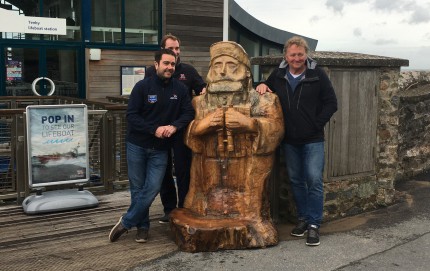 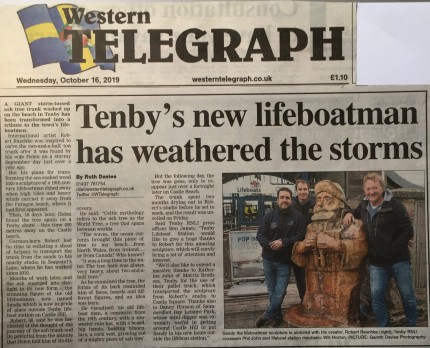 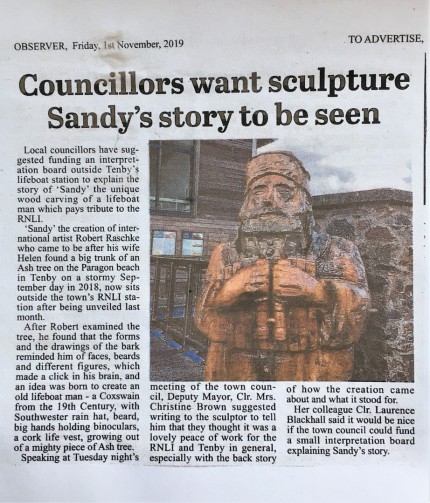 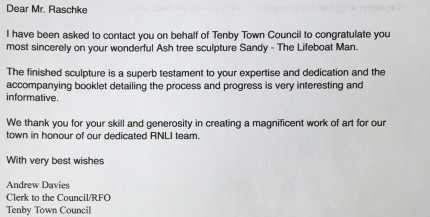 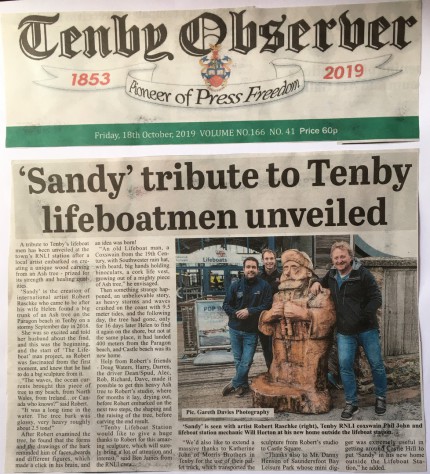 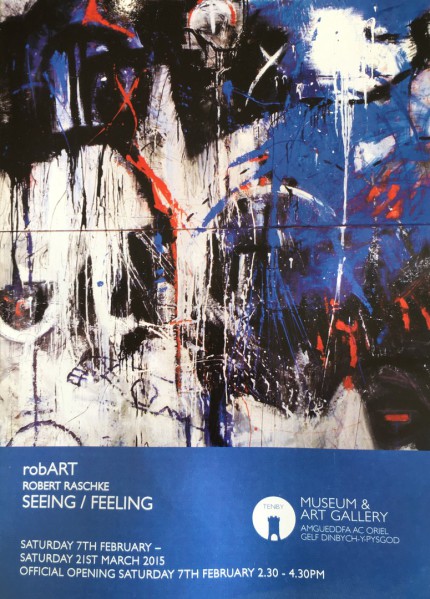 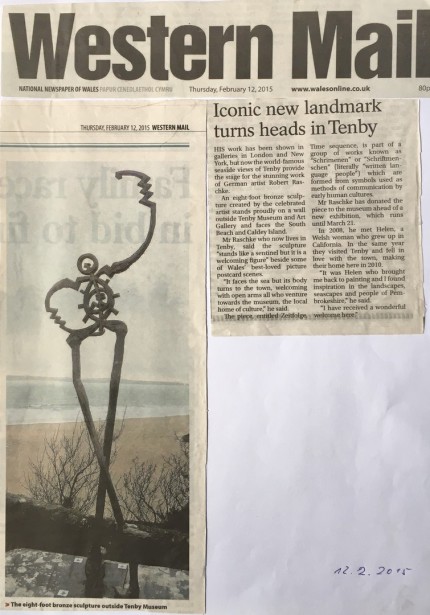 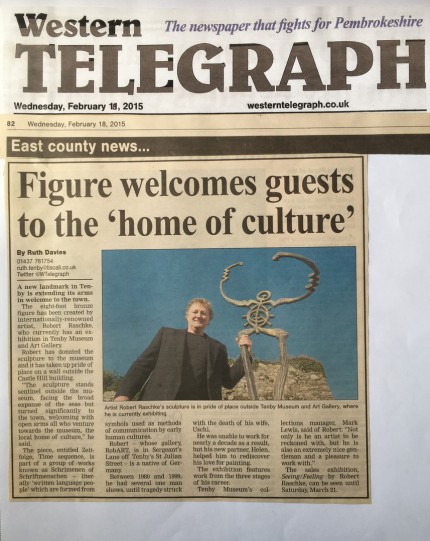 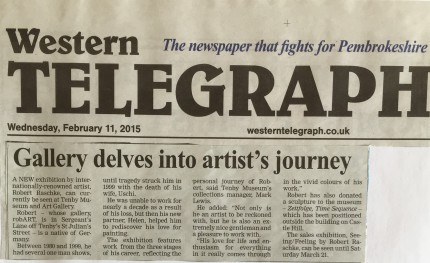 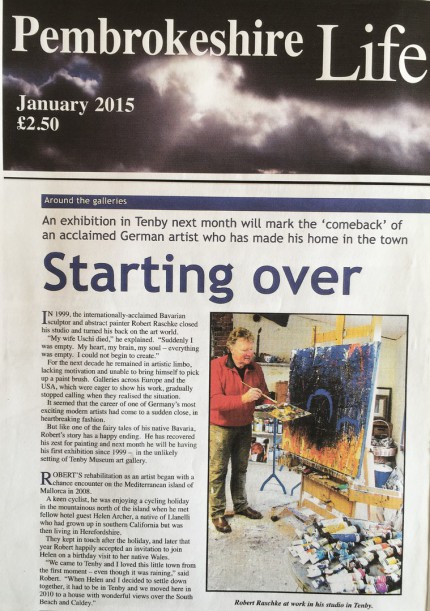 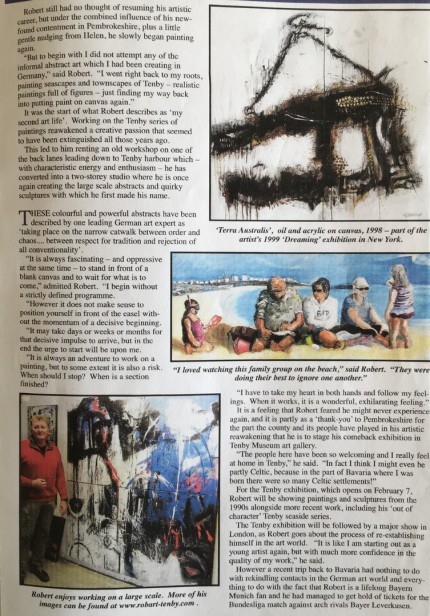